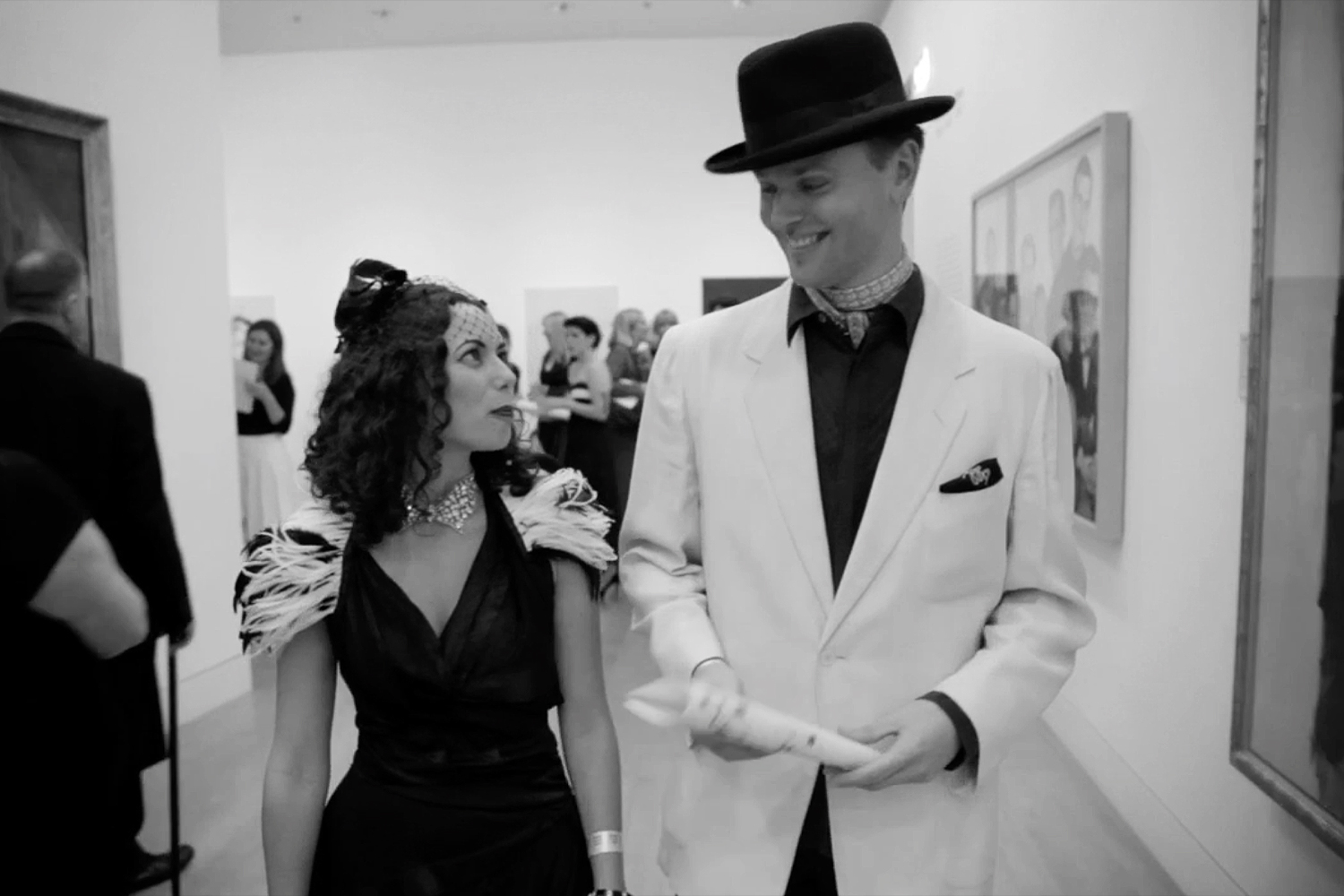 Experience designer and WXO founding member Pigalle Tavakkoli recounts how back in 2011, she and a team of creatives took over London’s National Portrait Gallery and turned it into the NPG Film Studio for one starry night – creating a template for late-night gallery events that has been emulated ever since.

The National Portrait Gallery invited Contemporary Vintage to develop an evening event for the public to celebrate their latest exhibition, Glamour of the Gods, which featured black and white photos from Hollywood’s golden age.

Contemporary Vintage was a creative collective connecting cultural organisations to new audiences. It combined cultural content with cross-platform storytelling to reach audiences in meaningful ways. The collective was founded by Oliver Vicars-Harris, with Pigalle Tavakkoli as Creative Producer.

The National Portrait Gallery’s core audience was a loyal yet ageing generation, who were primarily white and middle class. It also received tourists who only attended for one-off visits.

As a public institution, it recognised the need to expand its outreach to appeal to a younger and more diverse audience and engage with them to encourage repeat visits, for the future growth and relevancy of the gallery.

The gallery wished to attract fashion-forward audience between 25 and 35 who had never visited before, to attend an event in the West End on a Friday night in place of a hipster bar in Shoreditch. However its internal teams were unfamiliar with this demographic and unsure of methods to reach them.

This audience segment has been defined by the Arts Council England as Urban Arts Eclectic. We saw an opportunity to attract a young, style-conscious audience with an immersive production. I based the Glamour Factory on the Hollywood studio star system, and cast the audience in the role of aspiring starlets and matinee idols to go on a journey and explore the star-making departments throughout the building. This tapped into their appetite for being the first to attend unique experiences and enthusiasm for active participation. The event also provided a social setting to attend with friends and a visual backdrop to share their lifestyle on social media with their network.

We invited speakers and contributors from fashion, performance and science to explore how images were constructed through vintage and contemporary technologies and continues to be manipulated today. This provoked dialogue and debate, raised emotions and shifted perspectives, which moved the event beyond just being an entertaining spectacle to also becoming memorable and unforgettable.

We needed to draw on our extensive network – as we were unable to use the museum’s demographic and marketing base – and form partnerships with groups who were plugged into a fashion-forward audience. This provided promotional opportunities to reach their established following and speak directly to the audience with an authentic voice.

We partnered with The Broken Hearts, vintage-style DJs who play at leading fashion events. We offered them a dedicated Broken Hearts Cocktail Lounge with a stage and dance area. They brought performers from the underground cabaret scene to take part, ranging from 1920s flappers to 1940s torch singers. They also curated a debate on Power Dressing involving Grace Woodward, fashion broadcaster, and Ted Polhemus, anthropologist with a focus on style and identity. They presented their own radio show with Jazz FM, included a series of interviews with the speakers in the lead up, and carried out a live link-up during the event. We also partnered with Guerilla Science to bring in expert researchers from across a range of scientific disciplines, including physiognomy, psychology and neuroaesthetics.

In addition, we secured sponsors to elevate the event and form relationships for the gallery as a long-term benefit. We developed a sponsor edpartnership with Illamasqua, the fastest-growing make-up brand in the UK.It had built an edgy, loyal following primarily through social media, in place of traditional print and above the line marketing. It installed a vintage makeover station with make-up artists dressed in black and white. And to add extra fizz to the mix, we brokered a sponsorship deal between Hendrick’s Gin and the gallery to supply free cocktails for early arrivals to the event.

We anticipated generating excitement throughout the evening and wanted to extend the experience with an afterparty. We partnered with the Café de Paris, within walking distance of the gallery, for a discounted ticket offer to their club night.

The main challenges we faced was lack of understanding and support for social media and the scale of the venue.

During that period museums were fearful of the use of cameraphones and resistant to the rise of social media. They believed the spread of snapshots would tarnish the quality of the artworks and reduce the desire for people to visit and view them in real life. However, we knew harnessing social media would be crucial to the success of the marketing outreach and key to spreading viral interest far beyond the event itself. At the time, the National Portrait Gallery did not allow the use of phones or cameras. We reached an agreement where event guests would be allowed to take photos throughout the gallery as an exception, while they would not be allowed to take photos if they entered the exhibition.

The internal Marketing department was very busy and stretched across many projects. At the time, they posted minimal content on social platforms, instead directing resources towards traditional print and media. We supported them by setting up and managing a Facebook event page, Twitter handle and hashtags.

We wanted to demonstrate how social media could be seamlessly interwoven into the fabric of the event, rather than being a distracting add-on. We set up a Vintage Twitter Bureau, where the audience used antique typewriters to create glamorous or scandalous headlines about themselves, in 140 characters or less. Simultaneously, a role-playing secretary sat at a desk, using a laptop with tweet deck hidden inside a retro case, answering in the voice of movie stars to questions sent live by the audience via hashtags such as #NPGMonroe and #NPGBrando. The glamorous/scandalous headlines were added to a pinboard, while the tweets were projected onto a screen above the typewriters to instigate discussions around communication past and present.

An NPG Portrait Studio was set up by Photobooth Out of Order. While the audience waited in line, an actress shared tips on how to strike a pose and project their personality. Once their black and white portrait was taken, they could observe a graphic designer touch up the photos on a computer, as part of the construction of their image. They were informed to log into the Facebook event page on a set day the following week, when the portraits would be uploaded to an album so they could tag and share with their friends.

As we started generating social buzz, the PR team did not have capacity to manage the additional press enquiries and were considering turning them down. I offered to field the enquiries and organised a 1940s makeover for the Evening Standard’s journalist and photographer to take place at the gallery. This lead to a half-page feature in the week of the event. I also sent press invites to fashion and style bloggers to cover the event.

The scale of the venue required spreading the star-making departments across several floors and designing prompts to entice the audience to walk through vast spaces to reach the next threshold. In particular, there was a large room on the upper floor with a long uninspiring corridor that led to one of the departments.

As there was limited budget to cover décor and set dressing, I decided to lean into the limits of the space and covered the length of the floor with a seamless roll of paper and pens to recreate the Hollywood Walk of Fame. Role playing actors were stationed by the doorway, handing out stickers printed with names to the audience, and inviting them to draw their handprints with their new signatures on to the roll of paper. During the event, word spread about the NPG Walk of Fame and it went from being the most undesirable area to becoming one of the most popular and busiest parts of the building.

Who stood in your way or tried to stop you?

During the development of the event tensions emerged between the aspirations of the gallery to reach new audiences and ambitions to use innovative methods and the reality of their high workloads and limited internal resources.

This led to numerous meetings and required sensitivity from us to explain the approach we were using, gain their understanding on the merits and long term benefits, negotiate agreements where we could support and lead on social activities, and maintain buy-in to support the scale of the programme.

We generated direct feedback with the audience in the lead-up through social media, who validated our belief that they were seeking style-setting and out of the ordinary experiences. We created a guest list to continue the glamorous theme, which added a sense of urgency to attend the special event, increasing the hype despite it being free and open for all to attend.

Our partners and sponsors trusted our expertise and believed we would bring in the target audience. They were excited to benefit by opening up their mailing lists and involving their social teams in cross-promotional activities.

The gallery’s previous highest attendance for a public event had been 2,000. We were delighted to break the record with 5,000 guests turning up on the night. The event was featured in the Evening Standard, BBC News, Sunday Times Style Magazine and Jazz FM. There were numerous write ups across blog sites, such as Style High Club, Fashionable Passions, and Culture Cut.

The gallery’s teams were also enthusiastic of the success, with the Head of Participation reporting back, “Contemporary Vintage delivered an engaging proposal…and created a diverse and rich mix of events with different levels of engagement…the event became a Friday night destination…they supported marketing the event and helped generate strong social media interest.”

And the greatest achievement of all was overhearing conversations during the event, with young, style-conscious people saying, “I never knew about this museum, let’s come back to see it another time”.

Immersive late-night events have since become an established part of public programming for arts and cultural organisations, with museums and galleries recognising the importance of social media in reaching, engaging and retaining a younger audience demographic.