Harry Potter: A Forbidden Forest Experience: A Magical Enhancement To A British Woodland 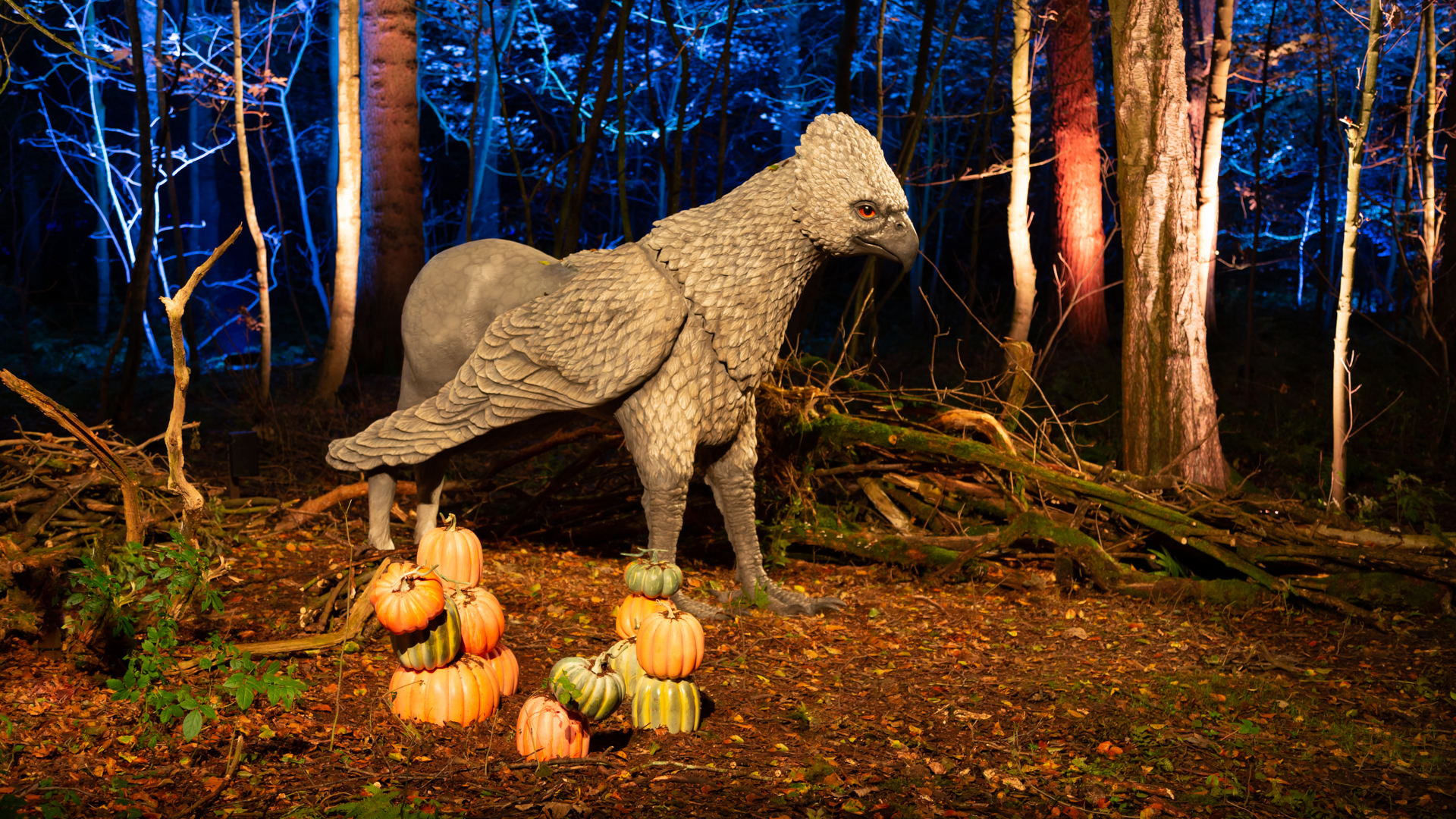 Harry Potter: A Forbidden Forest Experience is a nighttime woodland trail experience filled with magical creatures and wizarding wonders from the Harry Potter and Fantastic Beasts films, set in the woodland at Arley Hall & Gardens in Cheshire, UK.

Heather McGill and Anthony Norris, the directors and owners of production company Unify Productions, had the idea for the experience during the disruption caused by the pandemic, when they saw the success of outdoor experiences amid restrictions. Here they tell us about the challenges and triumphs of creating an “enhanced nature” experience.

The team is a joint venture between immersive experiences guide Fever, experience design company Thinkwell, and production company Unify Productions. This means we are a UK/USA/Spanish mix – we are waiting for that moment when we might actually all be together for dinner….

After endless events being cancelled, and losing key events like Wimbledon, the Olympics, and numerous music shows and festivals to postponements, Heather McGill and Anthony Norris decided to spend a two-hour phone call talking about possible projects and ideas. We had worked together before at Live Nation, London 2012 and a number of other events.

We spent those two hours talking about things we liked doing with our families (we both have young kids) how well the Christmas light trail market was doing, especially as they could stay open in the world of Covid. We riffed on this topic for a while and then started talking about woods and forests. At which point we hit on the idea of a Harry Potter Forbidden Forest, in a real forest location. Heather’s kids had just finished the final audio book in the car that week, so Harry Potter was still top of the agenda at home.

Heather and Anthony had the chance to work with Thinkwell at London 2012, looking at the Master Guest Plan for the Olympic Park. At the same time as doing that project they had been putting the finishing touches to their work at Leavesden on the Harry Potter Studio Tour, and have since gone on to several Potter projects with Warner Bros. Knowing this, and following the phone conversation, Heather dropped her old colleagues a line. The email asked whether it would even be possible.

Thanks to Thinkwell there was a conversation with Warner Bros within days and the plan to progress the project moved extremely fast from that point. Thinkwell have also worked with Fever before, and in their introduction the team had found the final piece of the jigsaw.

What was the Inciting Incident?

In a word: Covid. Without it this never would have happened. We are all being forced to think in terms of events that are not only secure in terms of government guidelines, but also allow guests to feel ‘normal’ and safe: being able to enjoy an immersive experience without worrying about a cough in the background.  This provides that.

The major tests to getting the project up and running were time and global supply chains. Given the brand, it was essential that the exact same attention to detail was applied to all the approvals for the event, be it props, technology, marketing or promotion. This meant the collective team with Warner Bros were put under significant strain in terms of getting designs, approvals, props made and final approvals. It is testament to the amazing team at Warner Bros and TBP knowing the brand so well that they guided the HPFFE team to get us over the line.

The other issue we all faced was the global supply chain during this period of Covid. Getting hold of basic goods has been really tough – cans of drink, bits of wood, staff!  Worst was the global freighting situation. A boat full of props practically went missing somewhere between America and the UK, meaning we ran really close to the deadline of opening to receive all our creatures. That was less than fun and very far from ideal.  Our invisible Thestral was very nearly permanently invisible given the lack of the boat!

We had a particular challenge with our unicorn. It was collectively named the ‘Unicorn Dilemma’ for several months (we also decided this was an excellent name for a band should we ever form one). One particular meeting goes down – in fact our only face to face production meeting with suppliers – involving Heather walking around with a pencil on her head, trying to explain what she was imagining it would look like. Thankfully the teams behind the technology managed to take the pencil analogy, and turn it into one of the guests’ favourite elements of the trail. It is truly magical, and if you don’t know how it’s done… it is very difficult to figure out.

Who stood in your way or tried to stop you?

Covid. Just Covid affecting everything in terms of the supply chain. Nightmare.

Our Allies have been our internal teams helping to get us over the line, but also the team at Warner Bros, who really believed in the idea from the start. We are lucky that the brand needs no introduction. This has meant when we have spoken to suppliers they realise that this is a serious proposition, and one built on quality and integrity of business. So, our suppliers have been a major ally. They’ve helped us get over the line, but also helped solve infinite problems.

A Google Drive. As boring as that is, with teams on two continents it has taken constant collaboration over shared documents and gantt charts, spreadsheets and presentations to get us to this point. Deeply unsexy, but there it is.

In terms of onsite – waterproof shoes. Waterproof anything really.

And in terms of the creative we have had a lot of fun relooking at the movies, the music scores, the books and the wider Wizarding World collateral. It’s been really fun to have as a reference tool an illustrated book of Fantastic Beasts and Where to Find Them.

The rain on site during the build was biblical. At one point the site flooded out and there wasn’t a single person who was dry. It was horrendous. The elements continue to challenge us, rain, frost and wind being the ones we dread the most. However, the kit has been built to withstand all of that and we have an amazing team who undertake fixes to get the show up each day. In terms of guests, we’ve only really had half a dozen shows with rain, but once you get into the woods it doesn’t really feel that wet. The trees are most definitely our friends from that perspective.

Storm Arwen was a low point. Unbelievably the day after the storm we had a site inspection and only one Cornish Pixie had been damaged. A couple of speakers got squashed, but every single major prop or piece of equipment escaped the wind. However, as we got the site back up and running we could have done without the snow that fell consistently over that day!

Some of our favourite parts of the experience are the ones that leave the imagination up to the guest. There aren’t specific creatures from the franchise to look at, but elements that allude to something from the brand. One of my favourites is our creature eyes section – hundreds of little blinking eyes. I love listening to kids walking through this section as they resolutely tell their parents that they can see a Gnome.

Power of the imagination is so important, and we need to rely more on allowing our guests to use them, rather than presenting them with a finished moment at every turn. Warner Bros and TBP have really helped push this concept and we now really get what they were asking us to do. We will absolutely do more of this in years to come: taking our guests to a point and allowing them to take that further, in imagining what they are seeing.

Best reward to date for us is seeing our site team consider the trail to be theirs. The storm was a really good moment: we didn’t have to ask anyone to come in early, they all offered before we had to. We had the food and beverage team sweeping the trail: not because we asked them to, but because this is a project that they believe in and want to make as good as possible. When your team of staff develop a really over-protective stance to a job, you know it’s a good event.

There is the obvious rewards of hearing the screams from the Aragog spider scene, and the oohs and ahhs of guests as they see something they weren’t expecting. Strong ticket sales, great reviews and lots of international interest has proved the concept to work, but it’s the intangible results that are really interesting.

However the biggest reward and result has been our programme of allowing our guests to ‘Give a Tree, Grow a Forest’. For a small optional donation, guests can help the project build the forests of the future. To date over 27,000 trees have been purchased. This has been a real joy for the project team to know that we are collectively contributing to more woodland within the UK.

More forests. By that we mean the chance to have more of these experiences in other territories, but linked directly to the chance to collectively build more forests. The more successful we can be, the greater ability we have to plant large areas of woodland, and directly help improve the natural environment for future generations.

Honestly… right now I am looking at the weather reports.

You can buy tickets for Harry Potter: A Forbidden Forest Experience now.