Campfire 3 – Is This The End Of Storytelling? 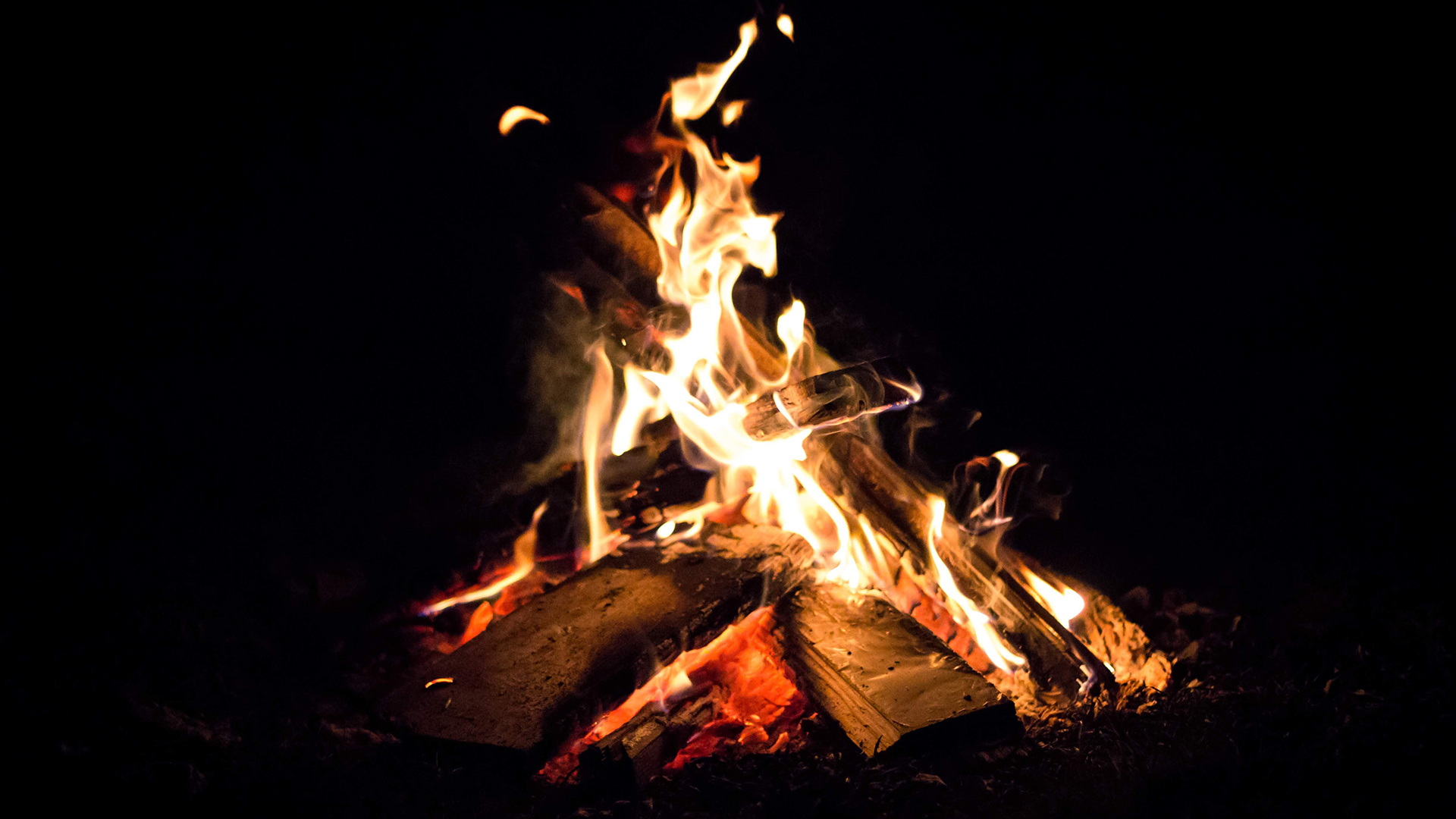 For perhaps our most brilliant and intense WXO Campfire yet, this is the controversial question our experience experts came together to try and solve, led by immersive trailblazer, Experiential Creative Director and former Disney Imagineer Stephanie Riggs.

As experience designers, we often cling to the concept of story to guide an experience. But as technology and audiences evolve, is it time to cast off the shackles of storytelling altogether?

Joining from Utah, Ecuador, Hawaii and Chichester, members of our Founding Circle gathered around the virtual campfire to hear Stephanie cram some very big ideas from her book “The End of Storytelling” into a very small time frame. Her brightly burning firestarter talk took us on a non-linear journey from classical story shapes to the disruptive notion of the “storyplex”.

Whether we consciously think about story structure or not – as WXO Founder James Wallman pointed out in his opening remarks – it’s a given that stories are the things that bind us together as humans and generate empathy, connection and happiness. The author Kurt Vonnegut once said that “stories have shapes which can be drawn on paper” – so it stands to reason that if we design experiences in the shape of a story, we are more likely to design experiences that lead to such empathy, connection and happiness.

Traditionally these shapes have been specifically structured. Think of Joseph Campbell’s circular Hero’s Journey. And often linear, as seen in Kurt Vonnegut’s “man in hole” story shape where person meets problem meets solution. But Stephanie’s prediction of the end of storytelling threatens to disrupt how we think about stories and in turn, how we design experiences.

Want to create experiences that are relevant for right now? Here’s Stephanie’s quickfire guide to understanding and utilising the storyplex.

Stephanie began by explaining how the ways in which the phrase “storytelling” is attached to other buzzwords in the Experience Economy – interactive storytelling, immersive storytelling, digital storytelling – gives her “the biggest cringe, as it sets us up for failure”.

“I propose that storytelling is such a well-established paradigm that even considering the possibility of not telling a story seems impossible; but technology changes what is possible.”

Going back to 1940 and Queens in NYC, she told the story of Chester Carlson, a young physicist who approached massive manufacturers such as IBM with his invention for duplicating documents using photons and electricity. This had the potential to be the biggest revolution in printing since the Gutenberg Press – so why did they universally turn him down?

According to Stephanie, his approach was so radically different that even highly trained engineers dismissed it, as they were unprepared and therefore unable to consider such a radically different approach. Similarly, when it comes to storytelling we’re so used to the tools we have that we find it hard to accept completely new ways of doing things – but technology changes what is possible. Every new medium gives rise to a new form of narrative.

Don’t be stifled by the old storytelling elements

In our existing storytelling paradigm, there are three key elements: the author (who creates the story by writing, painting, etc), the medium (a framing device such as a book, stage, television or computer screen), and the audience (who are generally passive recipients).

“Let’s release ourselves from the constraints of storytelling and move into something more dynamic.”

In the experiential and immersive space, however, the medium gets disrupted. There is an absence of frame – guests are placed inside the environment and have nowhere specific to look. This in turn disrupts the audience, who are given a sense of presence, agency and interaction. The story is no longer pushed through, but is responsive and regenerative.

If you want to tell a story, therefore, you’re going to have a serious problem.

“I’ve seen how the word “story” alone stifles creators and guests within a space,” says Stephanie. “It reinforces old creative habits and uses old paradigms rather than evolving with audiences – for example, people given a VR headset will often automatically look straight ahead because they are used to a traditional framing device”.

The storyplex is our way of releasing ourselves from these constraints by moving towards an interwoven network of story, technology and humanity. In the storyplex, our author is no longer the auteur; the elements of the story work more dynamically through the medium or technology, whether a VR headset or the human body; and it all comes together through the psychology of the experience.

Rather than a linear story structure that can be drawn on paper, these new stories look more like a funky techno screensaver: constantly evolving, interacting at different touchpoints, and responding to the audience and environment.

How to move from storytelling to the storyplex

So how do we actually lean into this paradigm shift in how we approach and create stories? Stephanie set out five steps to try:

Starting with the psychology of the audience is key – what values are you trying to get across, and how did the guest go through that journey? Are the story components easily recognisable to all participants? There are parallels with behavioural psychology, as you should design different nudges to get people to the same conclusion – Stephanie explained that she often works with game mechanics or magicians, as they are experts at leading people into certain thoughts or patterns without them realising.

Experience designer Paul Bulencea drew a parallel with the Nordic LARP movement, where, instead of listening to a story, participants become the story (he also suggested watching the video we’ve posted below). This kind of storytelling is much more active and iterative, with everyone “involved in the sandbox of co-creation – everyone contributes to the story and everyone is the lead character”. This type of immersion is a gateway to the subconscious for participants, Paul pointed out. These experiences can act like unintentional exposure therapy, and continue to interact with participants’ lives after they exit the experience.

Stephanie added that the “sandbox” has to have certain rules established to make sure that guests feel safe to disengage and go on a mental ride. Otherwise we’re “draining their cognitive resources” and not fulfilling our role as creators to take care of people.

Useful starter questions to ask when creating an experience in the storyplex are therefore:

Flipping the paradigm – some first attempts

Fired up with this new set of tools to play with in the sandbox, we split our campfire into pairs and asked them to rethink a previous linear experience they had designed through the psychedelic prism of the storyplex.

“Think about a linear narrative you designed or experienced recently. How would you reinvent it in storyplex terms?”

Experience design professors and lecturers Joe Pine and Andrew Lacanienta took the example of a university lecture, which is traditionally very passive and linear. They broke this down by suggesting recording lectures ahead of time, so that students can watch at their leisure and use the class time for discussion instead. There could be core pieces that everyone had to watch, but additional elements – a book, a TED Talk – that students could choose to investigate, adding a much higher level of interactivity and engagement.

Andrew explained, “While I’ve learned that students need structure and might struggle with the large amounts of autonomy and co-creation that take place in most immersive experiences, I’ve found that I might be able to have a “create your own adventure” type of experience for asynchronous portions of the class. Allow them to guide their own journey, be the author, co-create with the class, and prepare in different ways – all meeting the same learning outcomes so they are prepared for the synchronous lecture”.

Visual thinkologist Kevin Dulle often creates workshops for bankers, perhaps “some of the most risk-averse people you’ll meet”. To break out of the traditionally linear workshop design, he “discovered all I have to do is determine a starting point and a desired outcome, and then give them tools to apply along the way. The biggest thing is to give them permission to explore and create, and not feel like you have to control every nuance of the journey”. He gives the example of taking a banking model and switching it with that of an ice-cream business: the fundamentals are the same, but changing the context gave the bankers permission to play.

Paul Bulencea discussed the need to distinguish between what psychologist Martin Seligman has referred to as the distinction between a cosmetic drug aexperience and a curative drug experience. With a cosmetic drug experience, you get a heightened state of presence as the work has already been done by the designers; whereas with a curative drug experience, you need to start with an intention for exploration. You can also see this, Paul pointed out, with canyoning: where you need to give people a sense of security so they feel safe to explore throwing themselves down a river in a canyon.

Immersive theatre expert Noah Nelson talked about a summit he’d organised where they lost their keynote speaker at the last minute. Although he could easily have asked another member of the audience to step in, instead he decided to use a “salon format” – the “high table” of panellists modelled how the conversation would go, before being broken up and peppered throughout the salon to become members of other tables. At the end the high table would be reconstituted and have to report what had happened to everyone else. While the format was a happy accident in response to a crisis, it broke down the relationship between audience and participant for a more dynamic experience.

Structural engineer and architect Ray Hole echoed the importance of this kind of serendipity. Giving the example of a building project on top of Mount Snowdon in Wales, he told us of the time he’d organised for a judging panel to visit, only for them to be confronted with a choir who were there to rehearse in the wonderful open-air acoustics, creating a new dimension of experience that had never been planned. “Creating a story about something that was never intended is really interesting to me,” he said.

And with these words, Stephanie summed up the exciting potential of the storyplex – that it’s a renewed way of looking at stories that sets us free to iterate, experiment and evolve.

You might not want to sign up for all of its elements, but clinging to old paradigms stifles creators – and by focusing on process rather than outcome, we open ourselves up to new, unscripted possibilities that might emerge from co-creation and playing in the sandbox.

Is storytelling dead? Maybe not – but it’s definitely changing. And we’re delighted to be setting the stage for its evolution in the Experience Economy.

The 4th Experimental WXO Campfire, on Wednesday April 21, experimented with a new time – one designed to work for the Experience Economy community in APAC (Asia Pacific and Australasia).

Interested in taking part? Register your interest in becoming a member here to be the first to know about upcoming WXO events, both digital and IRL.