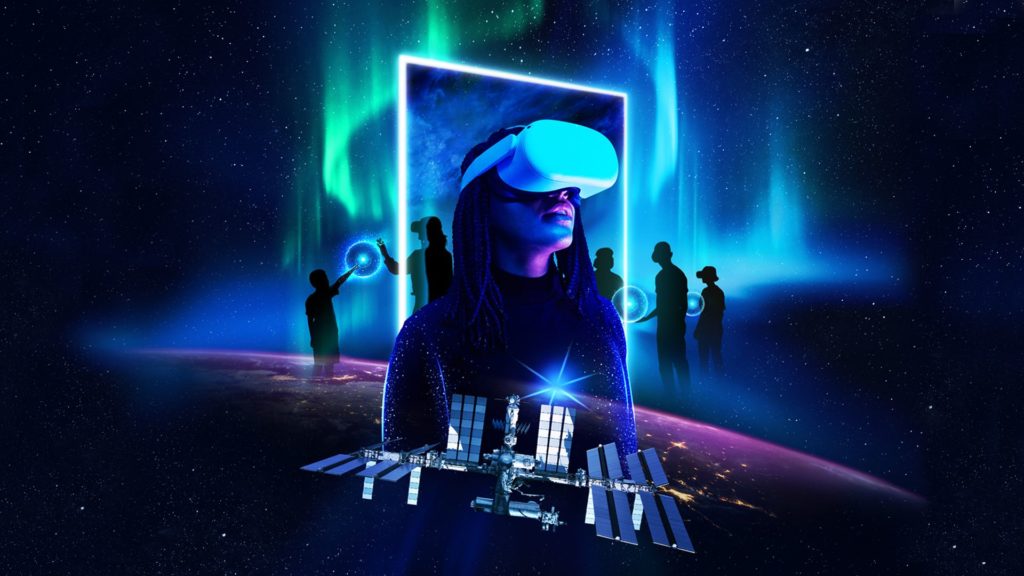 Welcome to Experience Radar 16, where we’re checking out the latest digital works at Art Basel Miami, climbing aboard the Orient Express for a voyage back to the ‘60s, and floating through space in Houston via the power of virtual reality.

[Header image courtesy of The Infinite by Felix & Paul Studios]

1. Just Do It: Nike Enters The Metaverse

Sportswear giant Nike has snapped up RTFKT Studios, which specialises in creating next-generation collectibles that merge culture and gaming. In February the cutting-edge company collaborated with teen artist FEWOCiOUS to create a pair of physical trainers alongside a virtual pair in NFT form, selling over 600 of both in just six minutes. As reported by The Verge, the startup recently launched a Clone X NFT collaboration with Japanese artist Takashi Murakami, offering a number of metaverse-ready digital avatars styled with collectible traits.

“Since starting out, we’ve always looked up to Nike, with the goal of creating a Nike born on the metaverse. Two years later, a new chapter begins,” RTFKT co-founder Benoit Pagotto said of the acquisition. Nike is hoping to benefit from RTFKT’s ability to leverage the latest in game engines, NFTs, blockchain authentication and AR to create “one-of-a-kind virtual products and experiences”.

A long time ago, in a galaxy far, far away, Lucasfilm and Imagineering created detailed sketches for their vision of a restaurant called the Kalikori Club, conceived for Galaxy’s Edge, a themed land at Disney. Their vision is soon to come to life aboard the new Star Wars Galactic Starcruiser hotel, an intergalactic cruise ship that opens at Disney’s Hollywood Studios in Florida on 1 March.

As reported by LA Daily News, Twi’lek singer and restaurateur Gaya will be the headline entertainer aboard the Starship Halcyon. Berths on the ship start at US$5,000 per room for a two-night stay, and the vessel is currently booked up months in advance. Gaya was initially envisioned as an underworld boss who owned the Kalikori Club restaurant, housed in a converted bathhouse, which had a clandestine speakeasy vibe and featured droid cocktail waiters.

Hinting at where the art world might be headed, digital art dominated at this year’s Art Basel Miami, which brought together thousands of NFT enthusiasts. Crypto art made a big splash at the show, with NFTs selling for seven-figure sums. Collectors don’t seem to be put off by the fact that the works only exist in the digital realm and are free for all to enjoy online. According to Raisa Bruner of Time magazine, the event has become a major sandpit for NFT art.

“NFT art collectors don’t see a distinction between the experience of collecting art and the experience of using art as an investment. Between the collectors, artists, crypto engineers and architects, there’s a community vibe. The NFT space has been built virtually, so the opportunities to meet in real life are really meaningful for these people. There’s no distinction between work and play, because those connections will carry them forward into new projects.”

With climate change leading to a growing interest in train travel, the Orient Express, whose name alone conjures visions of old-world glamour, mystery and intrigue, is perfectly poised to capitalise on the trend. Keen to transport voyagers back in time to the heady days of 1960s Italy, where skirts were short and morals were loose, in 2023 the Orient Express will launch a new ‘La Dolce Vita’ route through Italy, spanning 14 regions, from the Italian Alps to the sizzling south, across several itineraries.

A fleet of six trains boasting 12 deluxe cabins and 18 suites will run through eight countries, linking Rome to Paris, Istanbul, and Split, making the journey itself as exciting as the destination. Designed by Dimorestudio, the train interiors play on ’60s and ‘70s design cues, offering a fresh take on luxury train travel. As one might expect, the food and wine offering will celebrate regional Italian cuisine and native grapes.

5. Design Of The Times: Top Trends

Augmented reality and organic 3D elements were among the top 10 design trends of 2021, according to design creation platform Editor X. The pandemic has both sped up technological advancements and increased our longing to be transported back to a simpler time, when life seemed easier and Covid didn’t exist. According to Editor X, this year we’ve seen a shift away from a perfectionist, minimalist aesthetic towards something more natural, via hand-drawn logos and expressive topography.

Leaning in to a newfound thirst for nostalgia, brands took inspiration from the ‘60s and ‘70s this year, with some refreshing their original logos in a hat tip to their past. Clean lines are out as we move towards celebrating life’s imperfections and quirks, while brands like Burberry harnessed the power of immersive entertainment to draw people back to physical shops, offering consumers the added value of an experience rather than pure marketing.

“I want to paint the air in which the bridge, the house and the boat are to be found – the beauty of the air around them, and that is nothing less than the impossible,” said the father of Impressionism, Claude Monet. Mastering light play like no other painter before him, Monet ushered the art form into a new era, and now lovers of his water lilies can enjoy his works up close and personal at Miami’s Ice Palace Studios, where an immersive exhibition opens created by Paquin Entertainment Group opened on 7 January.

Allowing visitors to become part of the artworks, the paintings break free from their frames and swirl around the exhibition space via cutting-edge projection technology, accompanied by an original score and a voiceover narrating the artist’s thoughts on everything from colour and light to the Impressionist movement. Taking place across three themed rooms – the garden gallery, the prism and the oval-shaped infinity room – Beyond Monet charts the artist’s prolific career in glorious technicolor.

7. To Infinity And Beyond At Sawyer Yards

A new VR experience promises to take Houstonites to infinity and beyond. Created by the lauded Felix & Paul Studios, ‘The Infinite’ is an hour-long immersive VR and AR voyage to the International Space Station and back. Taking place at Sawyer Yards, the experience uses specialised VR camera systems designed to operate in microgravity, allowing visitors to see through the eyes of the astronauts while on the ISS and during a spacewalk ­– a first in VR history, according to Paper City.

The space walk follows astronauts Akihiko Hoshide of the Japanese Aerospace Exploration Agency and Thomas Pesquet of the European Space Agency as they work outside the station, installing a support bracket for a new solar array. Footage for the experience was filmed over two years, offering a rare glimpse into the daily life of an astronaut. The life-sized replica of the ISS spans 6,000 square-feet split into different zones featuring their own bespoke experiences, giving guests the chance to float from orb to orb via their VR headsets.