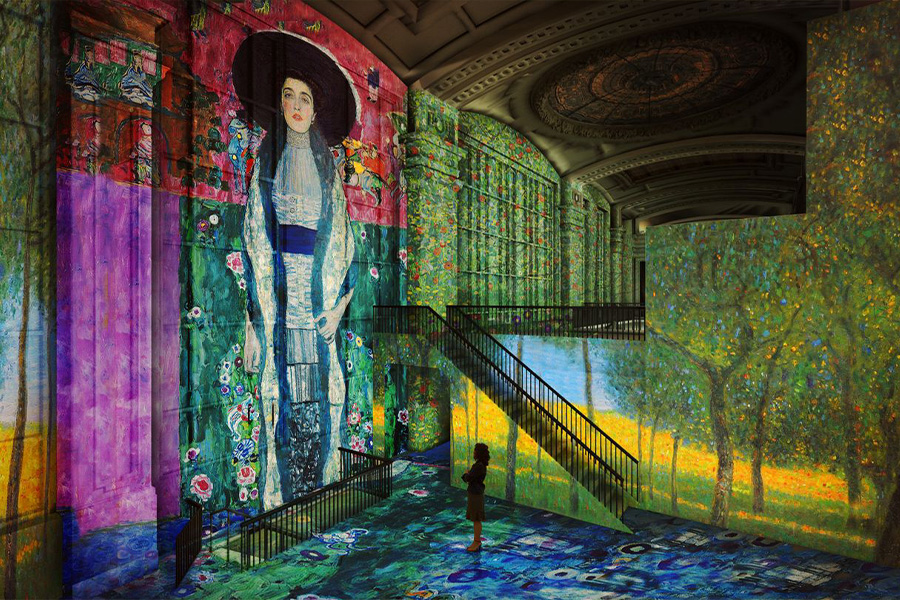 Welcome to Experience Radar 47, where we’re sipping on carbon neutral cocktails in East London, basking in the golden glow of Klimt in New York, and hopping on a train in Japan without any idea of our final destination.

If you like your cocktails with a dash of adventure then Avora might be for you. Soon to launch at the Rosewood Building in London’s Hoxton, the venture claims to be the “world’s first carbon neutral immersive experience”. As reported by the Evening Standard, Avora was hatched from the brains behind prison-themed bar Alcotraz in Shoreditch and the Wild West-inspired Moonshine Saloon in Aldgate. On arrival, visitors will don jumpsuits before entering an ethereal, Avatar-esque world being exploited for its natural resources by a fictional billionaire.

Guests are given the choice of working for the malevolent mogul or rebelling against him in a bid to save Avora. Along the way there will be the chance to create your own cocktail from freshly foraged ingredients, enjoy a zero-waste drink in an edible cup, and sip on a colour-changing cocktail to help you acclimatise to Avora’s atmosphere. Practicing what it preaches, a tree will be planted within reforestation projects for every ticket sold. The experience, which is manned by actors, lasts an hour and 45 minutes and includes three cocktails.

Having long been the go-to brand for all your instant photography needs, with the rise of digital and the demise of analog, Polaroid has pivoted to music in a bid to stay relevant. Entering the aural space for the first time, the American firm has launched a colourful range of Bluetooth music players, a radio station and a music app. The Polaroid Music range includes a quartet of beat boxes in bold colours. The entry-level device is the P1, a small, square player priced at £49.99. Next comes the P2, the most wearable player in the range, which can be placed around your neck for the full old school hip-hop effect.

The P3, meanwhile, brings the boom-box vibes, while the top-of-the-range P4 is the most powerful of the four and will set you back £260. “Great musicians and photographers capture what we can’t always express with words. They make us feel. We’re new in the music world, but we want to bring as much colour and emotion to the space as we can. We’re excited about this new chapter while still being as committed as ever to instant photography,” Polaroid chairman Oskar Smolokowski said. The speakers feature a red play button in a hat tip to the red camera shutter button found on Polaroid cameras.

The new division will extend Universal-owned characters and stories, including Jurassic Park and Minions, by bringing them to life in through toys, collectables, books, clothes, video games and NFTs. By joining forces, Woodbury believes the teams can work on a much larger scale. “Uniting these two talented teams into one group creates a powerhouse division focused on compelling consumer products and experiences both inside and outside our theme parks,” Woodbury told Variety. “Our goal is to create products and experiences for fans that are as innovative and compelling as our lands and attractions.”

It’s a hellish idea for control freaks, but random train travel is catching on in Japan, as rail operators seek to boost numbers following a Covid-related slump. As reported by the Japan Times, discounted train trips in which destinations are determined at random are gaining popularity in the country. In July, West Japan Railway launched the ‘Saikoro Kippu’, an app-based train ticket that chooses your final destination through the roll of a virtual dice. The heavily discounted, ¥5,000 round-trip ticket runs across seven stations and has proved popular among explorers keen to scope out destinations they would otherwise overlook.

“We want users to enjoy the game-like aspect and cost performance,” a JR West official said. Similarly, East Japan Railway plans to release the ‘Dokokani Byun’ round-trip package in December, which can be bought with reward points. Users who enter their travel dates and start locations are given four stations as possible destinations from 47 stations on the Tohoku, Hokuriku and other Shinkansen lines. If they like the suggested stations, they can apply for the trip, after which one of the four stations will be randomly selected as the destination. Even riskier for the risk-averse, low-cost airline Peach Aviation allows travellers to buy plane tickets without knowing their destination until they take off.

Online dating is hard enough, but what about dating in the metaverse? In theory it sounds great, offering the perks of IRL interactions from the comfort of your own home. According to Forbes, dating apps have been busy scoping out the opportunities of Web3 liaisons as they seek to remain relevant amid changing tech. Match Group, which oversees Tinder, has dabbled in metaverse dating and is hoping to roll out VR dating on an app linked to Tinder next year.

February saw the launch of VR Dating app Nevermet, which is being billed as the metaverse’s answer to Tinder. Three months later, Flirtual entered the game, allowing its users to “flirt in the metaverse and hook up in the real world.” This is just the tip of the dating iceberg and we can expect to see a slew of new Web3-compliant hook-up aps entering the metaverse in the coming years, along with big players like Bumble and Hinge launching their own VR dating experiences.

The Big Apple has a new projection palace in the form of Hall des Lumières, which has opened in the renovated teller hall and vault of the Emigrant Industrial Savings Bank, one of the first skyscrapers in Manhattan to be built in the Beaux Art Style. As reported by Ocula, the experience space launched with an immersive Gustav Klimt exhibition called Gold in Motion, divided into six sequences exploring the art and legacy of the famed Viennese founder of the Secessionist movement.

Created in collaboration with studio Nohlab and filmmaker François Vautier, the show features 30-foot-high luminous shifting projections of Klimt’s art mapped to the building’s architecture accompanied by an original score. Ticket holders will have access to a number of other digital experiences, including ‘5 Movements’, an interdisciplinary presentation that explores space and time through dance and different types of body movements. Hall des Lumières is French firm Culturespaces’ first permanent location in North America. The company also runs Atelier des Lumières in a former Paris foundry.

7. Could Psychobiotics Improve Our Wellbeing?

We know about gut instincts, but is there more to our gut microbes than meets the eye? According to Wunderman Thompson, ‘psychobiotics’ – probiotics that can yield specific benefits to the nervous system – are attracting attention in mental health circles. As consumers think about their mental health as it relates to their physical wellbeing, brands are leaning into the benefits that gut health can have on mental wellbeing. Probiotics are bridging physical and mental health and are evolving into psychobiotics as they show greater mental and cognitive benefits.

Seed Health is creating innovative solutions to neuropsychiatric health using probiotics, linking gut health to its potential benefits in easing anxiety, stress and depression. Thailand and Canada, meanwhile, have approved a registration for a new psychobiotic called PS128, which is able to adjust dopamine and serotonin levels, helping to improve sleep and reduce anxiety. US-Based Bened Life launched its first probiotic for brain health in August called Neuralli, which claims to be able to help balance serotonin, dopamine and cortisol, which affect mood, mind and movement, while helping regulate gastrointestinal tract health.