Experience Radar 43: Healthy Hedonism Is Here To Stay And The Medical Metaverse Has Arrived 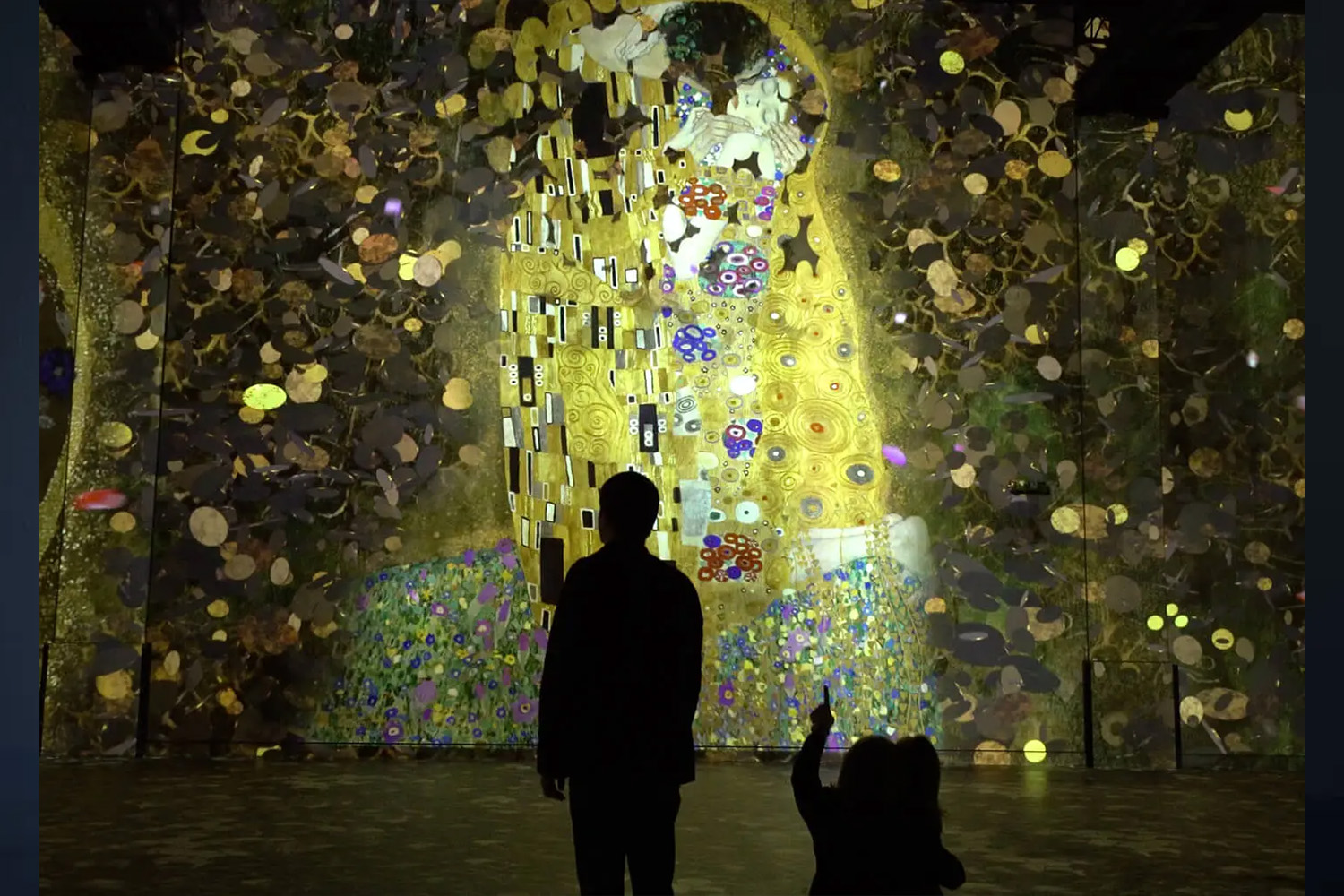 Welcome to Experience Radar 43, where we’re immersing ourselves in the (not so?) golden glow of Gustav Kilmt, taking a transformational new drone for a test flight, and pondering whether our inner lives are a work of fiction.

It was only a matter of time until crypto art sensation CryptoPunks – credited alongside Bored Ape Yacht Club for kicking off the NFT craze last year – branched out beyond the digital world into the physical. New York-based lifestyle brand HNDSM has launched a CryptoPunks capsule collection called Punk 1338 after commercial rights went live for the CryptoPunks community, allowing holders to launch their own projects. As reported by the New York Post, the Punk 1338 collection includes graphic T-shirts, sweatshirts, hoodies and ‘Be Well’ scented candles centred around CryptoPunk 1338, owned by AJ Jamani.

“We see our CryptoPunk 1338 capsule as an extension of what we are creating at HNDSM,” brand co-founder and NFT art collector Nunu Jamani said. “In terms of the Punk graphic, it reflects something that we are deeply excited by, both with respect to NFTs broadly as well as the historic significance of CryptoPunks.” Early supporters of the capsule collection will have access to future HNDSM physical drops as well as NFTs. The Jamanis are open to collaborating with other CryptoPunk and NFT art holders to create physical goods for their digital assets.

2. Are Our Inner Lives A Work Of Fiction?

A mind-blowing article by Nick Chater published on Big Think suggests that our inner lives may be a work of fiction due to the brain’s impressive ability to justify choices that we never made. “Modern neuroscience, psychology and AI have pushed us to the conclusion that the stories we tell ourselves about our motives, beliefs, and values are not merely unreliable in their specifics but are fictitious through and through,” Chater says. He believes our moment-by-moment stream of consciousness is the first rough draft of autobiography, and should therefore be approached with a “double dose” of skepticism.

Author of The Mind is Flat, Chater believes the human mind is an astonishing story-spinner. “The mind is a spectacularly inventive, if wildly inconsistent, storyteller, generating a continual stream of explanations, speculations and interpretations, including of our own thoughts and actions. And these stories are so convincing that we often mistake them for reports from a shadowy inner world. But introspection is not some strange inner perception; it’s the human imagination turned upon itself. We are, in a very real sense, fictional characters of our own creation.”

Want to know more about what this means for experience designers? Stay tuned for our review of Dreamachine, an immersive experience that examines the subjectivity of consciousness created by a team including neuroscientist and consciousness expert Anil Seth.

You might also want to check out Campfire 53: The Startling Ways That Expectations Shape Experience, in which science writer David Robson explains how understanding that our brains are “prediction machines” can help us design more impactful experiences.

3. Healthy Hedonism Is Here To Stay

Now that time is recognised as the most precious commodity, flopping on a beach for a week isn’t considered time well spent for many a holidaymaker, and people are seeking more extreme travel experiences that boost their overall health and wellbeing and leave them with a sense of achievement. As reported by the FT, fitness holidays are on the rise among endorphin fanatics. Sleepy wellness retreats are out, ‘healthy hedonism’ is in, and adventurers are getting their kicks at Átjan Wild Islands Festival in Faroe Islands, Above Below in Devon, Norway’s Morning Beat – a booze-free yoga festival headlined by trance DJs – and Love Trails, a running-meets-music festival in Wales.

Founder Theo Larn-Jones offers ‘add-on’ adventure days where adrenaline junkies can run 20km before abseiling along the Gower Peninsula. Fitness festivals with a strong sense of community were a hot trend this summer, and organisers have been mindful to make them a 360-degree experience, with on-site bars selling 0% abv beers and plant-based foods. Their Insta-friendly settings also add to the appeal. The Global Wellness Institute predicts that the trend for fitness/wellness festivals will “grow exponentially” in the coming years.

4. Metaverse Concerts Are On The Rise

We’ve had Marshmello, Travis Scott and Ariana Grande putting on concerts in Fortnite, with Scott and Grande’s performances both attracting a virtual audience of 28 million. Keen to get in on the act, last year Justin Bieber collaborated with virtual platform Wave as part of his 2022 world tour, allowing fans to appear alongside his avatar via huge screens stretched across the virtual space. The metaverse concert trend is mushrooming, as stars seek to tap into the lucrative Web3 sphere and reach a broader new fan base while they’re at it.

“Gaming companies’ foray into virtual concerts set a new precedent. Video game engines opened up limitless possibilities for creative set design and world-building that would never be possible IRL,” writes Declan McGlynn in Rolling Stone. With the rise of the metaverse and NFTs, artists and labels have an exciting new economic and creative virtual landscape to make their mark in. Proving how powerful the trend has become, this year’s MTV Video Music Awards included a gong for Best Metaverse Performance, while iHeartMedia has launched a dedicated space in Fortnite to host concerts.

5. The Medical Metaverse Is Here

We know about fun and games in the metaverse, but what about healthcare? According to Verdict, the medical metaverse is already here, and healthcare professionals have been busy using the tech underpinning Web3 to train surgeons and treat social anxiety. “As the metaverse expands at an exponential rate, new opportunities in healthcare emerge,” Evgen Verzun, founder of Kaizen Finance, told Verdict. Accenture predicts the metaverse to be “the next horizon” in healthcare, with eight out of 10 healthcare executives expecting the metaverse to have a positive impact on the industry.

In August a team of international surgeons had been training in VR for months before successfully separating three-year-old Brazilian twins with conjoined heads. VR programs helped surgeons from around the world work together in virtual spaces to plan the unprecedented procedure. Meanwhile, doctors are treating patients with phobias, OCD and social anxiety by placing them in virtual spaces to challenge their fears, and healthcare newbies are being trained in VR as computer-generated worlds allow for a full 360° view of a human body.

DJI, the world’s leader in civilian drones, has launched a transformational new drone that offers an unparalleled experience of immersive flight. Called DJI Avata, the nifty new gadget creates a new paradigm for first-person view (FPV) drone flight, allowing pilots to feel its astonishing performance, agility and easy control while racing through the skies. Coupled with the new DJI Goggles 2 and the intuitive DJI Motion Controller, according to SUAS News, DJI Avata delivers a flight experience “that was unimaginable until now”.

“DJI Avata allows you to explore the almost out-of-body experience of FPV flight,” Ferdinand Wolf, creative director at DJI, told the site. Sean Hollister, a reviewer at The Verge, seemed to be pretty taken with the drone. “The DJI Avata is something special. I knew it the very first time I flew. With a squeeze of my index finger and a flick of the wrist, I was a bird, a plane, Superman taking off into the sky, swooping down to the Earth below, skimming across a field of grass so close I could almost taste it, banking in a turn so smooth and level it felt like a car being drifted around a bend,” he writes. We can’t wait to get our hands on one.

Immersive art exhibitions are all the rage right now, with everyone from Vincent van Gogh to Frida Kahlo having been given the 360-degree digital treatment. The latest artist to be thrust into the 21st century is Austrian symbolist painter Gustav Kilmt. Exhibition Hub and Fever have joined forces to create the immersive experience at The Boiler House on Brick Lane in east London, which includes floor-to-ceiling digital projections and cutting edge video mapping tech in a 20,000 square foot light and sound space, allowing visitors to step inside his famous golden works. It also features a 10-minute ‘day in the life’ VR component.

The aim of the game is to democratise art and make it more accessible, but the experience has divided critics. “For all the talk of cutting-edge tech, it amounts to little more than a kaleidoscope of digital reproductions of famous Klimt paintings, reminiscent of the light shows that artists were experimenting with in the 1960s,” The Week said in its review. Laura Freeman in The Times was equally unimpressed: “What we have here is merely a cynical exercise in parting punters from their cash,” she said, praising the Frida Kahlo immersive show across town, which “does something genuinely original” with its source material.

If we’re ever going to establish standards for experience makers and avoid “experience-washing), we at the WXO think it’s as important to call out disappointing experiences alongside exceptional ones.

So if you’ve had a less-than-enticing experience of late and you’d like to share some constructive criticism, email our Editor to submit your anonymous Experience Review. Our first, on this very exhibition, is coming soon…