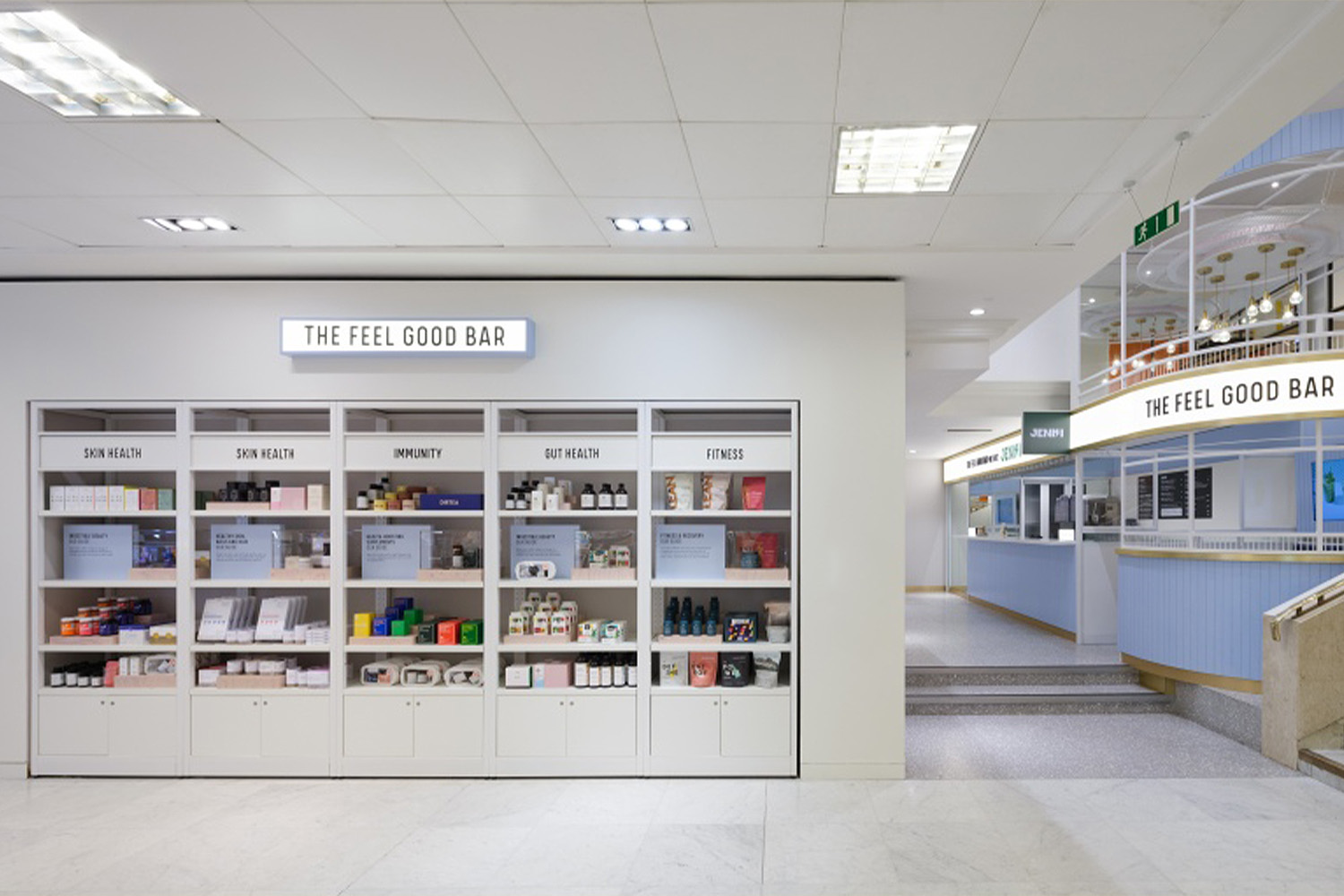 Welcome to Experience Radar 41, where we’re indulging in a multi-sensory feast at Europa-Park in Germany, taking on the Squid Game experience in New York, and learning about biohacking at the Feel Good Bar in Selfridges.

From restaurants to retail, physical spaces are getting dreamier, with absurdist redesigns transporting visitors to imaginary worlds and alternate realities. As reported by Wunderman Thompson, Balenciaga wrapped its entire London store in pink faux fur in April, giving shoppers the sense of stepping into a playful alternate universe. Meanwhile, the Taste of Dadong restaurant in Shanghai was conceived “to deliver a dream-like dining experience.” Sculptural partitions, dark surfaces illuminated by otherworldly lighting, and mirrored panels showing warped reflections all contribute to the surreal quality of the space.

In May, fashion designer Simon Jacquemus launched a series of pop-up installations at Selfridges conceived as a surrealist reimagining of his bathroom. “I wanted to create crazy and unrealistic installations, all related to water and bathroom imagery,” Jacquemus said. In Paris, Louis Vuitton created a life-size toy racetrack at the Louvre for the backdrop of its Spring Summer 2023 show, which “becomes a yellow-brick road for the imagination,” the brand said. As physical retail competes with digital for attention, retailers are upping their design game with increasingly outlandish concepts to win shoppers back.

In order to stay relevant in the fast-moving NFT sector, brands are turning away from kitsch collectibles towards products with real-world perks, like club membership and access to brand executives. As reported by the Wall Street Journal, savvy marketers have woken up to the fact that, in order to remain desirable, NFTs need to be of some use to their owners. NFTs that offer people a sense of community, or access to physical experiences and rewards are now the most promising for brands and are likely to outlive those focused on collectibles.

“It should be about the value it gives you in completing your everyday life,” AJ Dalal, managing director for Web3 at digital consulting firm Publicis Sapient, told the WSJ. The NFT industry is having to evolve into an arena more focused on utility as their novelty wanes and the value of crypto currency plummets. Coachella is in on the trend, offering lifetime passes to the annual event via NFTs this year, while a number of free NFTs gave pass holders access to benefits like free rides on the festival Ferris wheel and weekend passes for next year’s event.

(Interested in learning more about NFT utility and the role experience designers have to play in its development? Check out Campfire 68: Meet The Petaverse.)

You’ve seen the chilling Netflix show, now there’s the chance to live inside it as news reaches us that a Netflix-approved immersive Squid Game experience is due to launch in New York this autumn. According to The Hollywood Reporter, interactive gaming company Immersive Gamebox is the brains behind the adults-only experience, which opens in September on the Lower East Side. Squid Game is currently the streaming platform’s biggest hit, with a second season in the works and a spin-off reality TV show currently in development.

The multiplayer game will see attendees navigating various challenges based on the popular Korean franchise, including Red Light Green Light and Marbles. The experience will take place in ‘Gameboxes’ that utilise touch screens and motion sensing technology. “People are constantly seeking new ways to remain invested in their favorite content,” Immersive Gamebox CEO Will Dean said. “To reimagine Netflix’s most popular show in an entirely new format offers customers more ways to stay connected to Squid Game.” The experience highlights Neftlix’s ambition to rival Disney when it comes to IP and branding.

Keen to take NFTs to the next level (and prove it’s down with the kids), luxury jeweller Tiffany & Co has unveiled a rage of CryptoPunks NFT-themed, gem-encrusted pendants. As reported by CryptoNews, the so-called NFTiffs are comprised of a collection of 250 digital passes that can be minted when purchased and redeemed by CryptoPunks, holders for the creation of a custom designed pendant, and a NFT digital artwork that resembles the jewellery design. The necklaces are being designed by Tiffany specialists, who will interpret the characteristics of each CryptoPunk artwork into a custom-designed pendant.

In typical NFT style, scarcity is the key selling point. The 250 NFTiff passes are only available to CryptoPunk holders – mere mortals don’t get a look in. Even CryptoPunk holders are limited to three NFTiffs per person, which can be snapped on up the Ethereum blockchain. Such rarity doesn’t come cheap – each pendant comes with a €50,000 price tag, with the jeweller set to make €12m from the venture if all 250 are sold. Kevin Rose, founder of Moonbirds, described the move as “a huge win” for NFTs. “This is one of the top luxury brands in the world. It’s a big deal and brings in new interest on both sides of the fence,” Rose told CryptoNews.

Ambitiously billing itself as “the world’s  most exciting gastronomic experience”, Eatrenalin at Germany’s largest theme park – Europa-Park – is the brainchild of Thomas Mack and Oliver Altherr, who describe the venue as “a restaurant of the future that appeals to all the senses and takes guests on fantastic journeys”. The duo have recruited Spanish head chef and El Bulli alumnus Pablo Montoro, Dutch sous chef Ties van Oosten, who worked at Noma, and French-Austrian pâtissier Juliana Clementz to look after the food offering at the quirky venue.

The Eatrenalin experience combines gastronomic performance and cutting-edge tech with multi-sensory attractions and unfolds like a play, with the interplay of the senses playing a leading role in the show, which has been fine-tuned by an international team of producers, script writers and creatives. The aim is to reinvent gastronomy and touch guests on a gut level. “It’s time we took visitors on a futuristic journey into different worlds of pleasure, appealing to all their senses and astonishing them,” Mack said. The concept unites transport systems from Mack Rides and virtual media from Mack Animation and Mack NeXT.

Earlier this year drinks giant Coca-Cola launched a global innovation platform called ‘Coca-Cola Creations’. As reported by The Drum, to coincide with the launch, the firm released Coca-Cola Starlight; a zero-sugar soft drink that combines Coke with a taste “reminiscent of stargazing around a campfire, as well as a cooling sensation that evokes the feeling of a cold journey into space.” Sweet But Psycho singer Ava Max promoted the limited-edition fizzy drink with an AR concert accessed by scanning Coca-Cola Starlight cans and bottles.

The company has since followed up with a quirky new watermelon and strawberry limited edition created and designed by American DJ Marshmello, and is about to drop its latest innovation – the Coca-Cola Dreamworld and Tomorrowland AR experience, that explores what dreams might taste like. Coca-Cola Creations’ mission is to “take the iconic Coca-Cola trademark and lend it to new expressions, driven by collaboration, creativity and cultural connections,” the firm said. The innovation platform is integral to Coke’s ‘Real Magic’ campaign, which promised “unexpected mash-ups and metaverse opportunities.”

Luxury department stores are rethinking their approach to retail and are transforming their spaces into wellness destinations as consumers shift their focus from what products do to how they make them feel. As reported by Wunderman Thompson, retail giants the globe over are being made over to cater to a growing thirst for enriching in-store experiences. Galeries Lafayette has opened La Wellness Galerie at its Boulevard Haussmann flagship in Paris, complete with a sport and relaxation area and a broader wellbeing section in a bid to democratise wellness and make it more accessible and affordable.

In London, Selfridges has launched a wellness counter pop-up at its Corner Shop storefront and a permanent Feel Good Bar, where shoppers will be able to indulge in acupuncture sessions, hypnotherapy, sleep aids, IV drips, bio-hacking and hyperbaric oxygen therapies this autumn. The store is also transforming its cinema into a sleep session area, where customers can rest during their shopping sprees. US retailer Saks.com is also in on the act, having launched an e-wellness shop with over 600 products ranging from vibrators and skipping ropes to sleep machines and Vitamix blenders as part of a push to up its wellness game.