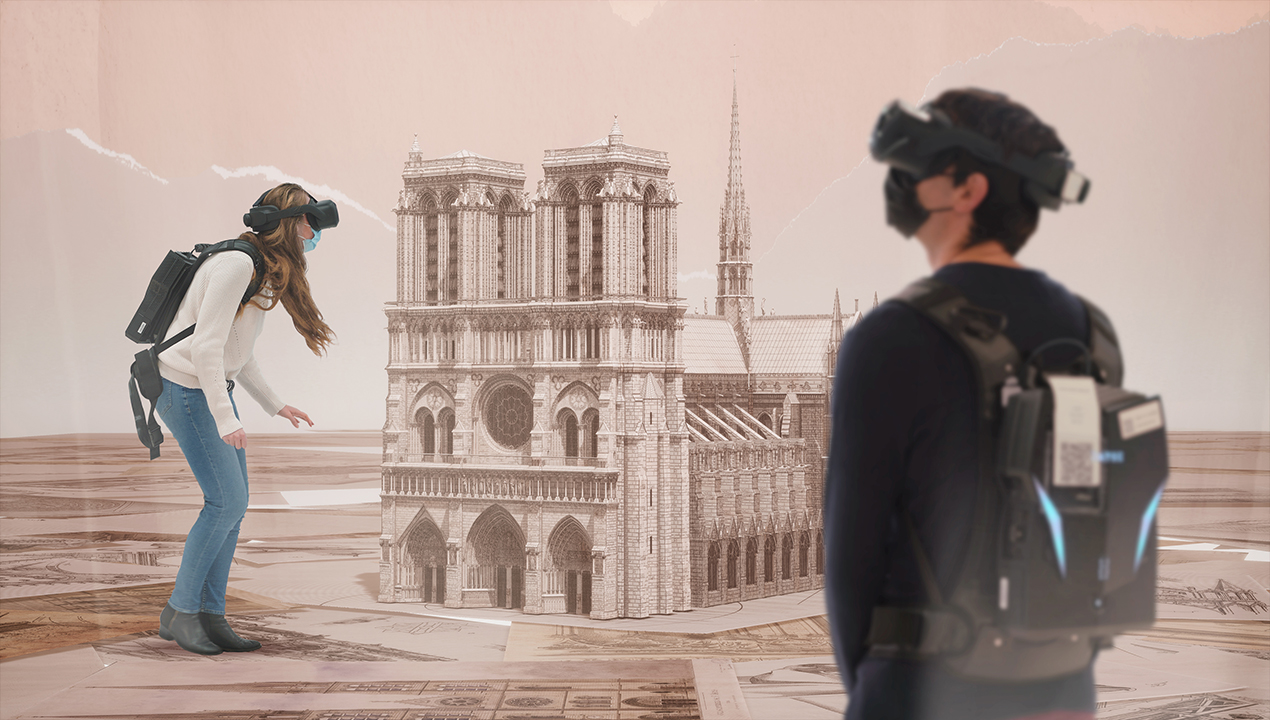 Welcome to Experience Radar 20 where we’re partying at the world’s first NFT-gated festival, exploring Notre Dame’s history via VR, and learning how to make digital twins of real-life objects.

Disney has patented a Virtual World Simulator that promises to offer an immersive 3D experience without the need for a headset, goggles, glasses, or a digital device. As reported by the Broadwalk Times, the simulator will allow people to interact in real-time in a digital world with their favourite Disney characters. The simulator goes beyond augmented reality and virtual reality, using multiple projectors to create realistic 3D images with the help of SLAM (Simultaneous Localisation and Mapping) technology.

“Rather than look through a phone screen or a headset, Disney developed a system similar to a movie projector to project on a real surface what humans see on a screen. It’s more real-world experience than looking at it through a phone,” Founders Legal patent technical adviser, John DeStefano, told Spectrum News. Disney is fast-tracking the simulator’s development and is hoping for a near-term rollout, with plans to use the tech at Disneyland and Walt Disney World.

Web3 tech company Afterparty is to host the world’s first NFT-gated art and music festival in Las Vegas in March. Taking place at immersive entertainment venue AREA15, the festival will unite NFT artists, musicians and collectors at the bleeding edge of Web3 for a live experience focused on the NFT art movement. The festival takes token-gated experiences from the metaverse to real-life. With NFT artists Nate Mohler and Alec Maassen as creative directors, this will be the first festival in history where there are no tickets – instead, NFTs unlock access.

The tokens serve as a ‘membership’ for the Afterparty universe, which includes collaborations and events at the Hollywood Hills Afterparty House and pop-up experiences at some of the biggest worldwide art and NFT gatherings, such as Art Basel. “Digital art is just the beginning of how profound NFTs will be for the creator economy,” said Afterparty founder, David Fields. “The festival brings this to life. NFT art deserves its own celebration, to be front and centre as the main event.”

3. Ayahuasca, Cosmonauts And A Heartbreak Hotel

Condé Nast Traveller has revealed the top ten travel trends set to catch fire in 2022. With borders re-opening and the world welcoming international guests once more, this year looks set to be a pivotal one for the travel industry. Australia and New Zealand’s reopening of their borders for holidaymakers, alongside the likes of Fiji and Vietnam, is set to lead to a surge in long-haul flight bookings.

CNT predicts that personal development retreats, including a ‘heartbreak hotel’ in Norfolk, will be big this year. You can also purge your past away in Costa Rica with the help of a little ayahuasca. For adrenaline junkies, extreme expeditions will be the getaway of choice this year, from biking safaris in Botswana to abseiling in Venezuela, while the rise in space tourism is fuelling a trend for cosmonaut training camps for Buzz Lightyear wannabes.

Unity Technologies is on a mission to digitally clone the world. As reported by Wired, the company is leveraging its game engine technology to help clients make ‘digital twins’ of real-life objects, environments, and people. “In a synthetic world, you can re-create a world that’s better than the real world for training systems – I can create many more scenarios with that data in Unity,” Danny Lange, Unity’s senior vice president of artificial intelligence, told Wired.

Companies are using Unity to model digital twins of robots, manufacturing lines, buildings, and even wind turbines to virtually design, operate, monitor, optimise, and train them. With an accurate enough digital twin, Unity’s game engine can even collect “synthetic data” off the simulation to better understand and advance its real-life double. The firm’s real-time 3D technology and AI capabilities position it to be able to compete with the likes of IMB, Oracle and Microsoft.

5. Notre Dame Gets The VR Treatment

While Parisian landmark Notre Dame remains closed after a devastating fire in 2019, history buffs can be treated to the next best thing – a virtual reality experience that brings the cathedral – and its history – to life. Called Eternal Notre Dame, the hyper-realistic, 45-minute experience was created by VR studio Emissive in collaboration with Amaclio Productions and The Orange Group. It takes participants on a journey back to the Middle Ages, when the cathedral was constructed, and brings them up to date via the major historical events and key players that have made their mark on the iconic structure.

Taking place at the Espace Grande Arche in la Défense, and also due to tour France, Europe, and, eventually, the world, as part of the experience visitors are free to roam a 500 square metre space dedicated to the cathedral, its history and construction site. “The objective was to present a complete overview of the history of the place in its dual artistic and religious dimension”, said Emissive’s creative director, Guillaume Martini.

Immersive Tech plans to develop its offering around HTC’s VIVE Pro 2, with its wireless adapter capabilities, and its innovative new VIVE Focus 3 and Flow standalone headset and tracking platforms, including its new wrist trackers. “With our Uncontained platform, we continue to advance the state of the art in VR experiences, creating the most robust and memorable experiences in the industry. Our relationship with HTC and VIVE is an ideal platform to build our deep immersion experiences on,” said Tim Bieber, CEO of Immersive Tech.

7. Virtual Shopping Malls May Soon Be The Norm

While traditionalists may mock them, a recent study conducted by Kantar on behalf of experiential e-commerce platform Obsess found that 70% of consumers who have visited a virtual store have made a purchase. As reported by VentureBeat, the survey, dubbed the ‘Metaverse Mindset’, measured consumer perceptions of and demand for virtual shopping experiences in the metaverse, which Bloomberg estimates will be worth nearly US$800 billion by 2024. The survey found that nearly 75% of Gen Z shoppers have bought a digital item within a video game, and that 60% think brands should sell their products on metaverse platforms.

“The majority of younger consumers want to be able to shop their favourite brands anywhere they go online, including on metaverse platforms,” said Obesss CEO, Neha Singh. “These shoppers have grown up online and many of them see the emerging metaverse as a virtual mall where they can shop and socialise. For brands, these findings highlight the importance of creating sound metaverse commerce strategies today that will resonate with consumers over the coming years,” Singh added.