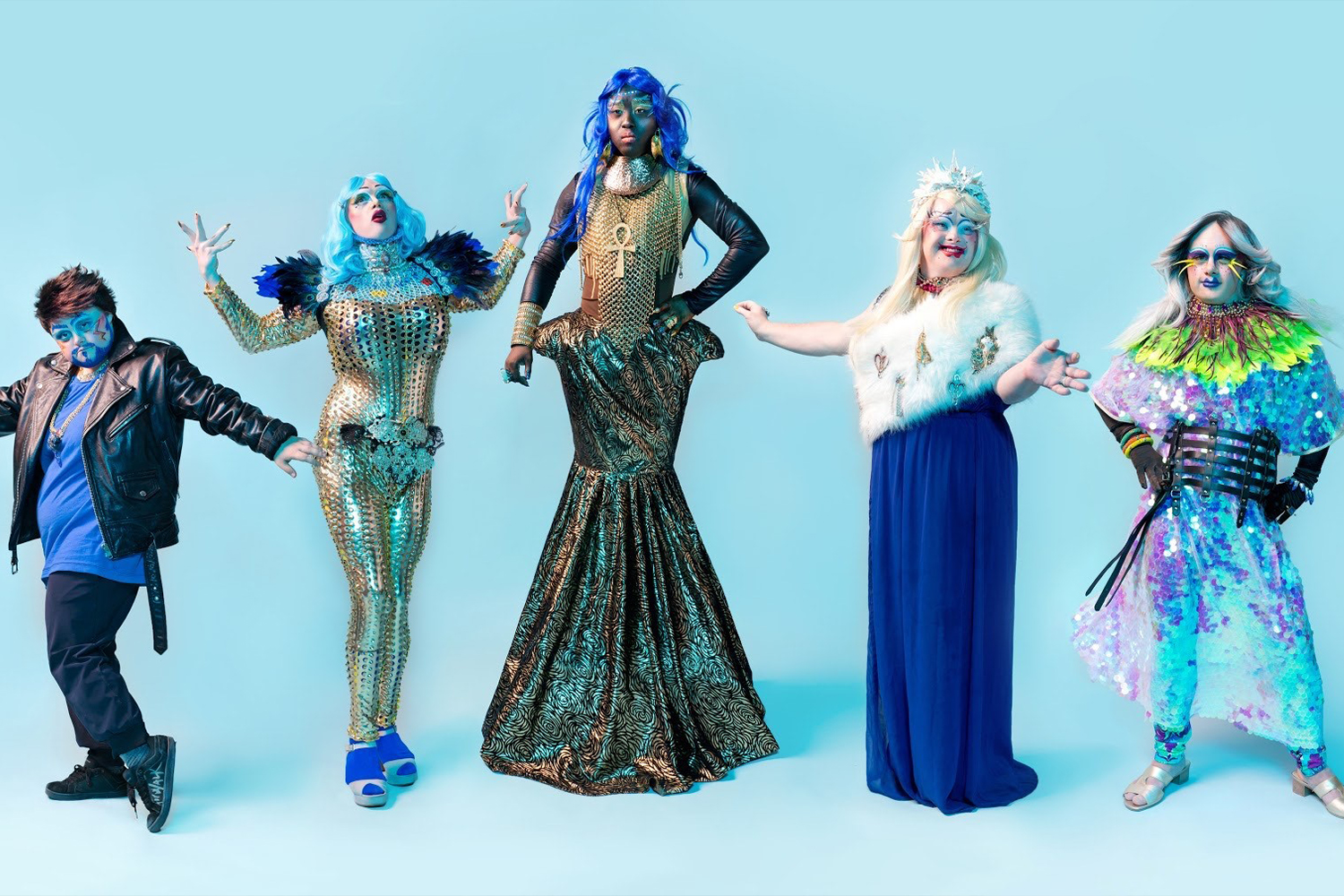 Welcome to Experience Radar 37, where we’re walking through Jo Malone’s sensory garden at Somerset House, trying on new Prada togs in Meta’s new virtual shop, and learning how to design for emotion.

If you like your attractions bright and beautiful head to Somerset House to scope out This Bright Land, a bold initiative spearheaded by artists Gareth Pugh and Carson McColl. The duo have transformed the building’s courtyard into a technicolour wonderland populated with pop-ups, street parties, live music, dancing fountains, immersive art installations, treasure hunts and an enormous ferris wheel. The festival celebrates London culture, giving a platform to both established creatives and grassroots communities.

Every weekend in August performers will take to the stage, with Vogue Rites hosting Saturday night Vogue Balls and Friday night parties hosted by creative collectives Daytimers, Nine Nights and Movimientos. This Bright Land seeks to encourage connection and collaboration through entertainment and play – we love the sound of the Jo Malone sensory Wonder Garden, featuring floral pathways, scent maps and breakout spaces offering moments of calm in the buzzing metropolis.

Keen to tap into the growing thirst for virtual togs, Mark Zuckerbeg’s Meta has created a digital fashion marketplace where web users can snap up snazzy garments for their Instagram and Facebook avatars. As reported by Vogue Business, plans are afoot to expand the concept to allow independent creators to sell their designs in the store. Big brands, including Prada and Balenciaga are already on board, and will be flogging their wares in the digital shop, which has launched in the US, Canada, Thailand and Mexico, with further rollouts due soon.

The ultimate goal is for both emerging and established designers to be able to independently sell their virtual clothes in the Meta marketplace. According to Vogue, the garments will range from US$2.99 to $8.99 to begin with. “The dream is to make it accessible to anyone. If you want to design fashion today, you need the physical materials and equipment, but in the future, anyone with a computer and an imagination will be able to come up with ideas for this,” Zuckerberg said.

3. It’s Time You Rewilded Your Mind

In our eco-conscious times, rewilding has become a buzzword. We’ve had rewilded cocktails made from foraged ingredients, city dwellers rewilding their urban landscapes, and a lot of noise made around brands’ efforts to become regenerative. Taking things a step further, Wunderman Thompson believes that the next frontier for conscious consumers will be rewilding their own minds. A new consciousness is embedding itself into the fabric of society that prioritises mental health and sustainable practices over mindless consumption and burnout.

People are increasingly looking to nature for answers, leading to the emergence of environmentally minded video games such as Terra Nil, a strategy game created for Microsoft Windows that challenges players to reconstruct an ecosystem in the midst of the life-like climate crisis. Travellers are also turning to rewilded experiences for a new source of slow luxury. “We can all find this sense of wonder and meaning in nature. Not only in our connection with it, but in the sense of hope and renewal it seems to offer us,” Lindsay Baker told the BBC.

4. How To Design For Emotion

When experiences deliver an emotional sucker punch, we’re more likely to remember them, but designing for emotion isn’t as easy as it sounds. In an article published by the Interaction Design Foundation, professor Alan Dix explains why factoring in emotions is a vital element of experience design. Astute designers aim to reach people on three cognitive levels: visceral, behavioural and reflective, so that they develop positive associations with the experience. According to Dix, emotional design anticipates and accommodates people’s needs and responses.

“As a designer, you have to focus on user’s responses, which are naturally emotional. As rational as we may like to think we are, emotions are at the heart of how we interpret reality. Positive experiences drive curiosity. They help motivate us to grow as individuals,” says Dix, who believes designing for emotion begins with a deep understanding of your audience and paying attention to detail. To tap into people’s emotions, experiences should be personalised to each user, and should be filled with surprises. “The emotional design of a product or service affects its success and thus the bottom line,” he says.

With the thirst for immersive experiences showing no sign of slowing, London is to get a permanent immersive theatre space beneath Waterloo station. Called Labyrinth, the venue will boast a bar called Underland and The Rosarium restaurant, inspired by the English gardens of Lewis Carroll’s era. As reported by BlooLoop, the subterranean venue (which has been four years in the making) opens in November with a show called Alice’s Adventures Underground, created by Les Enfants Terribles, which merges storytelling, music, circus and puppetry.

The venue is the brainchild of Les Enfants Terribles creative directors Oliver Lansley and James Seager, and producers Hunter Arnold and Gavin Kalin, who joined forces to launch the Labyrinth theatre company. “Labyrinth will operate a world-class permanent home to the ever-flourishing immersive genre for the existing and new generation of theatregoers and experience seekers,” Seager said. “Labyrinth Waterloo is just the beginning and we’re very excited about what the future holds.”

While solo travel is on the rise, much of the enjoyment of trips abroad lies in the shared experience, both during the experience itself and reminiscing about it afterwards. While museums and attractions are keen to keep their fingers on the pulse and adopt the latest VR tech to lure visitors back through their doors, attractions and tourism consultant Bart Dohmen believes that, given the solitary nature of headsets, VR disconnects the user from their travel buddies.

“In recent years we have seen improvements, such as MACK NeXT Yulbe, where you can see and hear each other while enjoying your game. We’re also starting to see ideas without glasses, which puts the use of VR in the world of tourism and themed entertainment in a whole new perspective,” Dohmen writes on LinkedIn. “Take the VR bus in Rome. As soon as the bus comes near a location of interest, the windows turn into a VR screen that shows what the city looked like 2,000 years ago. This seems like a fun use of VR that, if well synchronised and with the right narrative, could become very popular with tourists.”

7. The Metaverse Comes Of Age

Tech heavy hitters Microsoft, Epic Games, Meta, Sony and Unity have joined forces to form the Metaverse Standards Forum – along with 33 other firms – in order to foster open, interoperable standards for AR, VR, geospatial and 3D tech. As reported by The Verge, the forum will focus on “pragmatic, action-based projects” like hackathons and prototyping tools for supporting common standards. It’s also interested in developing “consistent terminology” for the space. Open standards would make it easier for developers to build identical content for different platforms and for users to export data between services.

Big name absentees (for now) include Apple, Roblox and Niantic, the latter two of which have made great early strides in blending games and virtual worlds. The first Metaverse Standards Forum meeting is due to take place later this year. “Industry leaders have stated that the potential of the metaverse will be best realised if it is built on a foundation of open standards,” the group said in a press release. “Building an open and inclusive metaverse at pervasive scale will demand a constellation of open interoperability standards.”