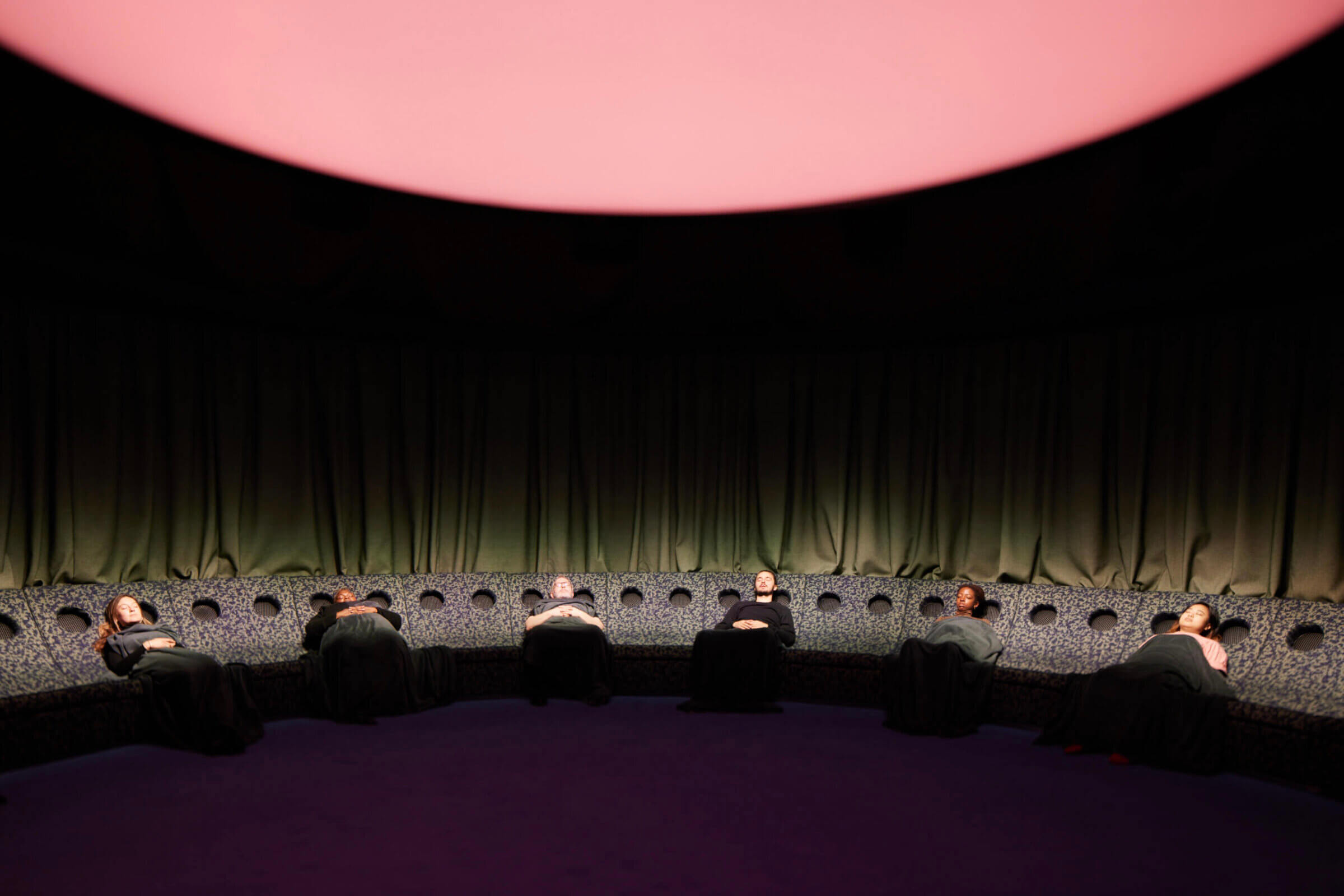 Welcome to Experience Radar 30, where we’re smelling the roses with Georgia O’Keefe, grappling with dark forces at London’s Stranger Things experience, and tripping out without psychedelics in Woolwich.

The UK capital is to get its own Stranger Things experience in August that will allow fans to live out an episode from the series in real life. As reported by Campaign, show creator Netflix has partnered with Fever on the immersive experience, which includes a new storyline developed for the event featuring “memorable settings and characters from the show”, according to Campaign. Taking visitors on a journey into the dark side of the fictional town of Hawkins in Indiana, where the show is set, the hour-long experience includes a visit to the Hawkins Lab and into parallel universe, The Upside Down, where attendees will have to use their nous to save the town from things that go bump in the night.

After fending off alien life forms, guests can chow down at food and drink hub, Mix-Tape, where Scoops Ahoy will be serving up syrupy butterscotch sundaes; play retro video games at the Palace Arcade; and get up close and personal with a Demogorgon while shopping for Stranger Things merch. “Our Stranger Things fans will embrace the chance to be the heroes of the story, working alongside Eleven, Mike and the rest of the gang to fight the evil threatening to consume Hawkins. Fans love losing themselves in the world when they watch the show. Now, they will be able to live out an episode from the series in real life,” Greg Lombardo, head of experiences at Netflix, told Campaign.

2. Smell The Roses With Georgia O’Keeffe

Known for her dazzling, provocative flower paintings, those keen to get up close and personal with American modernist artist Georgia O’Keeffe’s famous large scale works can now experience them in multi-sensory detail at a new exhibition in the US. As reported by Wabe, ‘O’Keeffe: One Hundred Flowers’ has launched at Illuminarium, a 30,000 square feet immersive space in Atlanta that harnesses the power of cutting-edge projection and sound technology to deliver all-consuming experiences. Its latest show features a series of evolving visual landscapes synced with a powerful, all-female soundtrack.

“We have scent, so you’ll actually smell the flowers in the Illuminarium. We also have in-floor haptic systems, so you feel it when the music is playing that supports the spectacle. And then you’ll interact with the content itself through LIDAR technology. It’s an amazing experience,” Illuminarium’s CEO, Alan Greenberg, told Wabe. LIDAR technology, more commonly used in cars, will be incorporated into the experience to make visitors feel more closely connected to the artworks. “LIDAR tracks every single person that’s in the Illuminarium and allows us to do really clever things with interactivity,” Greenberg said.

Creative transformation company WPP and interactive entertainment firm Epic Games, developer of Fortnite and Unreal Engine, have joined forces to help WPP deliver a new era of digital experiences for brands in the metaverse. The partnership will include a new training programme to upskill WPP creatives on how to create custom brand experiences in Fortnite and how to use Unreal Engine, an advanced real-time 3D creation tool used across a range of industries. As a part of the partnership, WPP teams will work with experts at Epic to learn how to build next-generation interactive experiences leveraging Unreal Engine.

WPP teams will be able to take advantage of training and tools to create new experiences in Fortnite, where creators can build imaginative worlds for brands. “The collaboration will accelerate the building of diverse social entertainment experiences that players across the world will love. This partnership with WPP bolsters our mission to educate more trailblazing brands and creators on how Epic’s tools across Fortnite, Unreal Engine and 3D marketplaces like ArtStation and Sketchfab can be used to bring their metaverse visions to life,” said Matthew Henick, vice president of metaverse development at Epic Games.

4. Airbus Envisions The Future Of Flight

Aircraft maker Airbus is challenging digital natives to map out their vision for how the metaverse can be used to provide better services and experiences for frequent fliers. As reported by HeroX, the initiative is open to anyone with a killer idea for how Airbus can use the metaverse to improve the passenger experience. The five most compelling entries will win a share of the $30,000 prize money. Creator of some of the world’s most innovative commercial aircraft and a global leader in the aerospace industry, Airbus has a long history of experimenting with and adopting new technologies.

“Airbus is just starting to explore the metaverse. With this challenge, we are tapping into the power of the crowd to understand some of the potential of the metaverse, specifically with respect to the passenger’s door-to-door experience. We are looking for immersive, experiential ways in which a passenger can interact with the metaverse during the travel process and are open to anything that improves a passenger’s experience, whether your idea provides a new way to complete a task, increases accessibility, or offers a service that was previously not available,” an Airbus spokesperson said. To submit your entry, click here.

5. Trip Out Without Drugs At Dreamachine

A new psychedelic experience (minus the LSD) has launched in London, Cardiff, Belfast and Edinburgh, which The Guardian describes as being: “as close to state-funded hallucinogens as you can get”. Co-created by a team including Turner winners Assemble and musician Jon Hopkins, Dreamachine is a 21st-century version of a psychedelic technique patented in the ‘60s by Brion Gysin, friend of William Burroughs, who discovered that being exposed to a simple flashing white light while your eyes are closed can induce intense visual hallucinations. Light flickering at between eight and 13 flashes a second synchronises with the brain’s alpha waves to set off the LSD-free trip.

Shoeless, you enter a large circular chamber where you lie back on a recliner where speakers pump out a pulsing soundtrack. Flashing white lights are projected into the pitch-black chamber, leading “complex crystalline structures like bright white beehives or molecular lattices to form out of nowhere, an architecture of pure light”. The reviewer also experienced “a magenta mist blooming in the void”, and “a dazzling marmalade” wall of colour. “If you can lie back, relax and open up, this is a sumptuously enjoyable ride,” the reviewer concludes. “It’s a healthy and harmless way to enjoy the secret intoxicants in your own brain.”

6. Where Are Fashion NFTs Headed?

Fashion brands from Louis Vuitton to Balmain have jumped on the NFT bandwagon with brio, and serious money has been made, but does the concept have legs?  “You made the drop, it is successful. So what? What are the use cases in terms of customer lifetime value?” Teddy Pahagbia, founder of Blvck Pixel, a consultancy that helps businesses and brands adopt metaverse technologies, told Vogue Business. Among the brands to have succeeded in the space are Gucci and Adidas, both of which have an active presence on Discord, the latter partnering with irreverent NFT art phenomenon Bored Ape Yacht Club.

Thus far, the fashion brand approach to NFTs has varied, with Gucci releasing an art film and partnering with a virtual celebrities company, Balmain digitally dressing Barbie and auctioning trainers with a celebrity gym, and Louis Vuitton expanding an ongoing project to give away free collectibles. According to Vogue, savvy NFT collectors are demanding more “utility” from their purchases in the form of drip-fed additional perks and benefits from owning the NFT. The risk, going forward, is that one-time NFT fans will tire of the effort required to play in the space, and will inevitably become desensitised to the hype. As the NFT space evolves, brands will need to sharpen their strategies in order to succeed.

Dutch design duo Ralph Nauta and Lonneke Gordijn, collectively known as Studio Drift, had to cut short their latest performance – a four-day illuminated drone dance over Hamburg – after a saboteur unleashed an “aggressive disruption” from enemy drones that caused several aerial collisions. As reported by ArtNet, the performance, called Breaking Waves, was set to appear in front of the façade of Hamburg’s Herzog and de Meuron-designed Elbphilharmonie concert hall, while a live performance of Thomas Adès’s piano concerto played. Studio Drift describe the performance as: “an attempt to build a moment of connection between humans, machines and the environment”.

The duo called off the remaining days of the performance while German aviation security looks into the attack. “There have never been disruptions to air traffic of this intensity and aggressiveness in Germany. Since it cannot be ruled out that such crimes will be committed again by anonymous drone pilots in the following days, it is irresponsible to continue Breaking Waves in order to protect viewers and employees,” the pair wrote in an Instragram post. The performance was commissioned by the Hamburg International Music Festival at a cost of €800,000. Studio Drift specialise in architectural design lighting and installations that have graced some of the world’s most significant buildings and museums.